Independence Bridge is a drawbridge in Bay City. It carries Truman Parkway over the Saginaw River and was opened in 1973 to replace the earlier Belinda Street Bridge (built in 1893).


Until 1864, the only means to traverse the Saginaw River between West Bay City and Bay City was by boat or ferry. The Third Street Bridge crossing played an important role in the growth of these communities, which merged as one Bay City in 1905. In 1976, the old reliable swing span bridge mysteriously collapsed one evening after opening to allow the passing of a lake freighter. A great debate followed about the location of its replacement, the Vermont – Woodside connection just north of it won out and the Liberty Bridge was built, a four lane draw bridge. (Alan Flood) 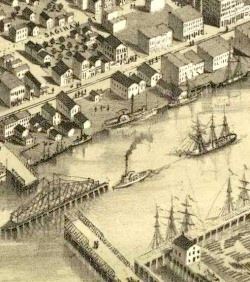